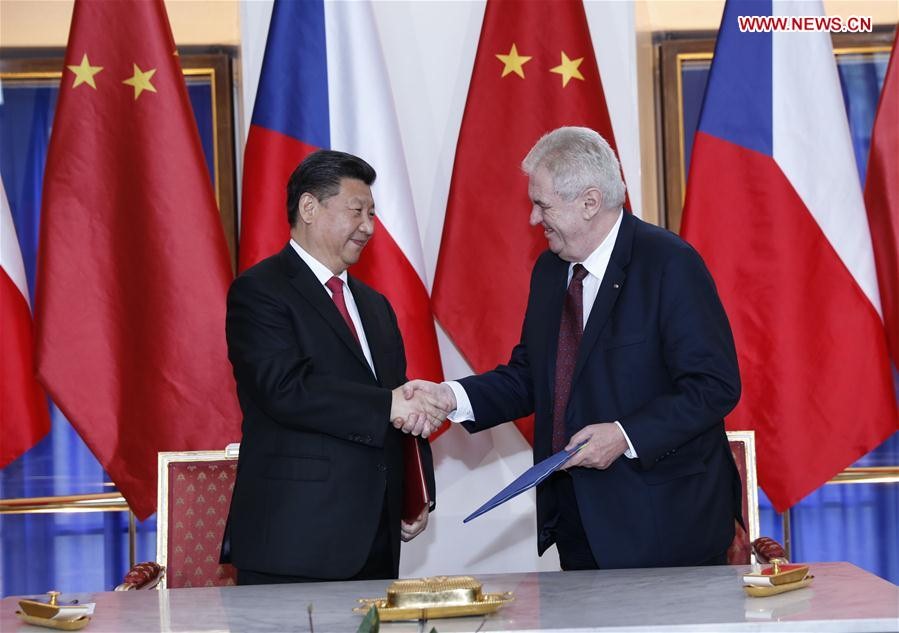 Richard Turcsanyi, an expert from the Institute of Asian Studies at Comenius University in Slovakia, stressed the importance of the visit, the first by a Chinese president in 67 years since China and the Czech Republic established diplomatic ties. It is also Xi's first trip to the CEE region since he assumed presidency in 2013 and his first trip to Europe this year.

"The Czech Republic could be perceived as a Chinese window to Europe," Turcsanyi was quoted by Slovak daily Pravda as saying.

Sanja Vasic, director of the Center for International Economic Relations of the Belgrade Chamber of Commerce in Serbia, said Xi's visit to the Czech Republic is of great importance. The establishment of strategic partnership between the two countries not only elevated bilateral ties, but also benefited China's cooperation with the CEE region as a whole, Vasic said.

Xi's visit absolutely reflected China and the Czech Republic's success in forging stronger bilateral ties through the framework of China-CEE cooperation and the Belt and Road Initiative, which are both based on the spirit of win-win cooperation, said Plevnik.

Xi's speech in Prague, with its emphasis on peace, cooperation and prosperity, sent out encouraging message to all Europeans, said Plevnik.

Xi's visit also marks the coming of a new era of deeper, peaceful economic cooperation, new jobs, and broader understanding and learning between the East and the West, Plevnik added.

Marceli Burdelski, a professor from the University of Gdansk in Poland, said that Xi's visit to the Czech Republic was a very important international event, and it was an important part of China's efforts to develop its ties with CEE countries within the framework of China-CEE cooperation, or the "16+1" mechanism.