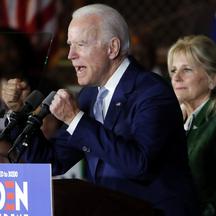 The Americans did not elect the president of the world, but the reality is that the political decisions of the American president significantly determine the state of relations between the states and the rules that will shape the world order. A world with anxiety and hope awaits the winner.

If Joe Biden becomes president, he will pursue his foreign policy, but he will also return to the goals he shared with Barack Obama, of whom he was vice president, with whom he fought against pushing America into the role of buyer of Asian and European goods.

Biden would not protect American economic and political interests by disrupting the process of economic globalization and devaluing the role of international organizations. His leadership would mean the end for a period of narcissistic American foreign policy. Biden's foreign policy biography is in a way a guarantee that his administration would direct world politics towards building a new multilateralism. In such relations, cooperation and competition between large and small states could coexist regardless of what economic rivals are, and this could bring more stability and certainty into international relations.

On Donald Trump’s foreign policy has been said thousands of times that was unpredictable, vague, insulting and fickle, but it has been said few times that it was not pretentious and as such was brutally honest when it came to American interests.

Trump’s bare business realism has severely weakened the strategic partnership between Washington and Europe, divided NATO, and allowed Turkey to humiliate that archaic military alliance. He pushed relations with China into a creeping trade war and peace. Trump has threatened Europe if it would not support his political and anti-market suppression of China’s technological-innovative growth, whose metaphor has become Pompe’s diplomacy against the purchase of Huawei’s 5G equipment in Europe, a deep economic war with Washington coud be reality. It has made global institutions even more helpless.

That approach has made global institutions even more helpless.

All countries have felt the effects of American opposition to the processes of strengthening the world’s economic interdependence. Economic globalization and the global fight against climate change have ceased to be an ideology produced, spread, and led by America and have been dismissed as detrimental to American interests.

Such a direction in international relations has worried Angela Merkel, Emmanuel Macron and Xi Jinping, but throughout Trump's tenure, no new coalitions have emerged to reduce US pressure on global institutions and protect international relations from the effects of America's hard unilateralism, which at the same time has become the only content of American global leadership.

This was partly because the European Union still cannot imagine a new world and order of global powers without a strong transatlantic partnership, while China has no political interest and, as it estimates, no capacity yet to inherit America's role in international relations. In China, they don’t like to hear at all about how China will soon overtake America because they think these kind of stories are not helpfull. So students at the famous Tsinghua University asked the dean to remove a professor who taught that China is stronger than America in economy, technology and military. New global powers are being born, but America is still globally superior in its economic, strategic, and digital power.

America’s return to common sense policy and rejection of the vulgar foreign policy that Haiti and African countries saw as “shitholes” could, if Biden wins, begin as early as 2021, but it will be a longer deal, as the State Department has gone through these four years through strong pressure of politicization, cutting and departure of top cadres.

In addition, America’s foreign policy activities, whoever wins, will necessarily be slowed down due to the fight with Covid-19. Better organization of health services, addressing immigration and racism are issues that need to be addressed urgently.

For the European Union, Biden's victory would be a great gain and encouragement given that it  is in historically difficult times due to the failure to contain the second wave of the corona virus pandemic and the rise of terrorism. Both cannot be won without strong global cooperation.

Expectations that Brussels' relations with Washington will get better are not realistic if Trump remains, while the risk that Biden could continue the current policy of strategic and economic separation of America from Europe is small.

Under Biden's administration in the European Union, there would be an increase in stability and predictability in strategic and economic relations with Washington, a form of partnership that would make the Union stronger in world politics.

America-UK relations will be strengthened whoever wins. So far, these relations have flourished at the expense of the European Union, but with Biden's victory, Great Britain could become more cooperative in negotiations with the Union on the costs of its leaving. Without the support of Trump, who was the only American president who did not view Europe as an ally, Boris Johnson would have become weaker, and thus perhaps more cooperative. Biden's goal would not be to weaken and destroy the European Union, but to strengthen all forms of transatlantic ties, which is a good policy for Croatia as well.

Trump encouraged populism and the far right in Europe, and his departure could help Poland, Hungary and Slovenian Prime Minister Janez Jansa to return more quickly to European values ​​in politics and unity.

What Trump has done well in the Middle East such as the so-called Abraham's agreement with Israel, but also in relations with North Korea, are achievements that Biden should upgrade if he finds the strength to forgive Trump for systematically destroying Obama's foreign policy legacy.

Biden’s arrival could further stabilize relations in Asia as well, where Trump also pursued a policy of divide et impera and used economic blackmail to get support from other countries for his politics  against China. It is very likely that Biden would renew the Trans-Pacific Partnership (TPP) which Trump rejected because he was interested in growing geopolitical tensions in Asia.

If he becomes President of the United States, Biden will strictly adhere to the "one China" rule and not increase tensions by using Taiwan, while it remains unclear how he would position himself in relation to Hong Kong, Xinjiang and the South China Sea, which are issues that can always complicate US relations with China.

The world's second largest economic power has shown great strategic restraint and self-control in its relations with the Trump administration over the past four years, which was not easy given that it has gone through a lot of bad things with the US that has expelled Chinese journalists, made it difficult for Chinese students to stay in the United States… In all of this, China has never viewed America as an enemy and tried to position itself as a partner not as a strategic threat.

Biden could, in part, pursue a policy of cooperation and competition with China which Obama and he led before and encouraged China to be a partner to America in the global affairs  of strengthening multilateralism and economic globalization.

Whether Biden or Trump the economic rivalry of the world’s largest economies will only grow, but the trade war as well as China’s consent to buy American products worth hundreds of billions of dollars has not proven to be a solution for America. China’s trade surplus with the U.S. was 43.6 percent higher in September than in January 2017 when Trump became president.

The U.S. will continue to pursue a policy of restricting Chinese exports and technology companies, but Biden will more use the World Trade Organization in doing so, whilst Trump has imposed sanctions on senior Communist Party officials and the country’s largest technology companies.

Regardless of the fact that Biden will be a different president, the leadership in Beijing at  the fifth plenum of the Central Committee of the Communist Party of China has concluded that in the next five years it will work on implementing the "double circulation" initiative, which aims to increase the independence of China's high-tech sectors and wean the economy from dependence on foreign trade how some new Trump, if he appears in the distant future again, would not be able to bully Huawei like Donald Trump did.  He heblamed China for all American economic and health problems and at the same time called the president of China his "great friend."