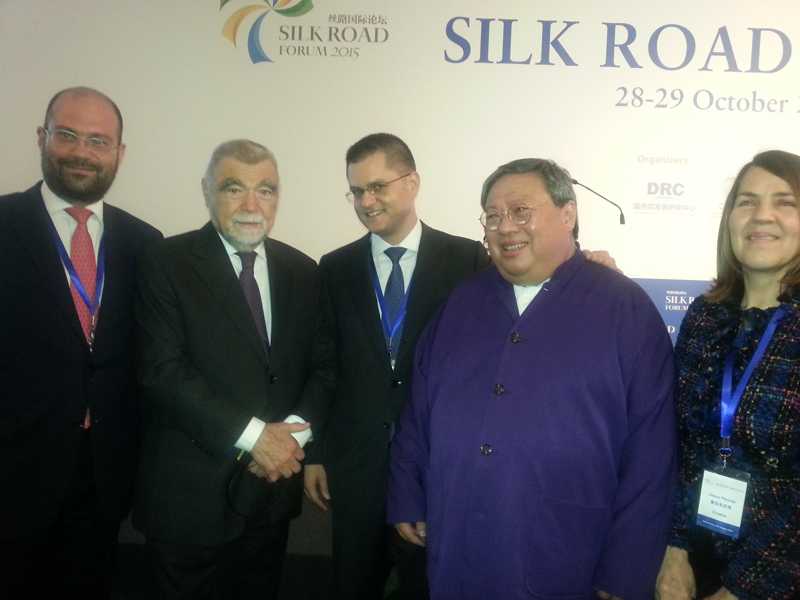 From left to right, Damjan Krnjević Mišković, Senior Fellow of the Center for International Relations and Sustainable Development (CIRSD),Stjepan Mesić, President of the Republic of Croatia (2000- 2010), Vuk Jeremić, President of the CIRSD, Dr. Patrick C.P. Ho, Chairman and Secretary General of the CEFC,  Dr. Jasna Plevnik, Vice President of the Geoeconomic Forum.

The Silk Road Forum was co-organized by the Center for International Relations and Sustainable Development (CIRSD) and the Development Research Center (DRC) of the State Council of the People’s Republic of China, in partnership with the Chinese Embassy in Spain, the China Development Research Foundation, the United Nations Development Programme (UNDP), the UN Finance Center for South-South Cooperation, and the Toledo International Center for Peace (FRIDE).
Topics covered during the 2015 Silk Road Forum plenary sessions included infrastructure connectivity, international cooperation in production capacity, Silk Road construction, and the impact of the UN 2030 Agenda for Sustainable Development on the One Belt, One Road’ initiative. In addition, the Forum featured three thematic roundtable discussions, respectively focusing on think tank cooperation, business cooperation, and financial cooperation. Each of these in-depth interactive sessions featured around 30 participants.

The Croatian nongovernmental think tank The Geoeconomic forum, Association for the world economic development studies is established in 2004.
We are strongly supporting that approach which explains The one Road one Belt initiative as a strategic Road forward for Asia, Africa and Europe. It is honour for me to speak in this room full of people who care for stability, peace, and shared prosperity of the world.
Building the new Silk Road forward means that economic interdependence process must go on. This process has been one of the great strategic successes of the last 25 years and that kind of foreign policy has brought us here in Madrid.

Expert answers on economic, political and cultural meaning of The project

The One Belt one Road has made a good start, but implementation of this visionary project will be a very long, and pragmatic journey. Many economic, financial and political, and business things need to be discuss, many events to explain. So, for understanding of the initiative is important clarity of its aims, instruments, and benefits. That is cardinal task of yesterday’s launched SILK ROAD THINK TANK NETWORK (SILKS) which seems to me already pretty well intellectually equipped to give expert answers and reflexions on economic, political and cultural meaning of The One Belt one Road initiative.
Apparently an unfolding strength of the SILKS will depend on right methodological approach which could be described in Confucians style: respect each other, and engage in real dialogue. SILKROAD THINK TANK NETWORK will be OPO: objective, pioneering, and open.
My country Croatia is a member of the EU and a part of South East Europe, the region where countries are facing a challenge to found a solution for economic growth and high unemployment. The recession has made the condition of the poor in Croatia much worse. There is no fast railway connection so there is a tremendous need for modern infrastructure in Croatia.

In Croatia there is a certain lack of knowledge on The one Belt one Road project, and The Geoeconomic Forum is focused on bringing the concept of it closer to academic and business community, the Government, the Parliament, and to the broader public presenting the Initiative as an opportunity for Croatia.
It is clear enough that Croatia with its northern ports, roads, and favourable geotransfer position has an opportunity to become a part of 21st century Maritime Silk Road which is a story of trans modal logistics, speedy transfer, and speedy distribution.
Yes, Croatia could benefit of that extremely ambitious project if the Government becomes more interested in this new pattern of integration among Asia, Europe and Africa.
The Croatian people support cooperation with China. The Geoeconomic Forum, the Croatian think tank specializing in integration processes in Croatia, the Region, The EU and the World recently conducted a survey of China’s image in Croatia. The results show that 93.8% of the respondents believe that Croatia should develop broader economic cooperation with China and 86.4% of the respondents believe that the differences in the two countries' political systems are not an obstacle to deeper cooperation.

The power of think tanks, their knowledge plus influence, could be used as a platform for broader understanding of the OBOR which could be helpful for the public, policy makers and business leaders who have the capacity to implement the vision.
In my opinion, the cooperation of think tanks could be based on the inclusion of different types of think tanks along the Silk Roads: governmental and non-governmental, with global, regional or local influence. The Belt and Road is global project, but local situation will have a strategic position in its successful implementation.