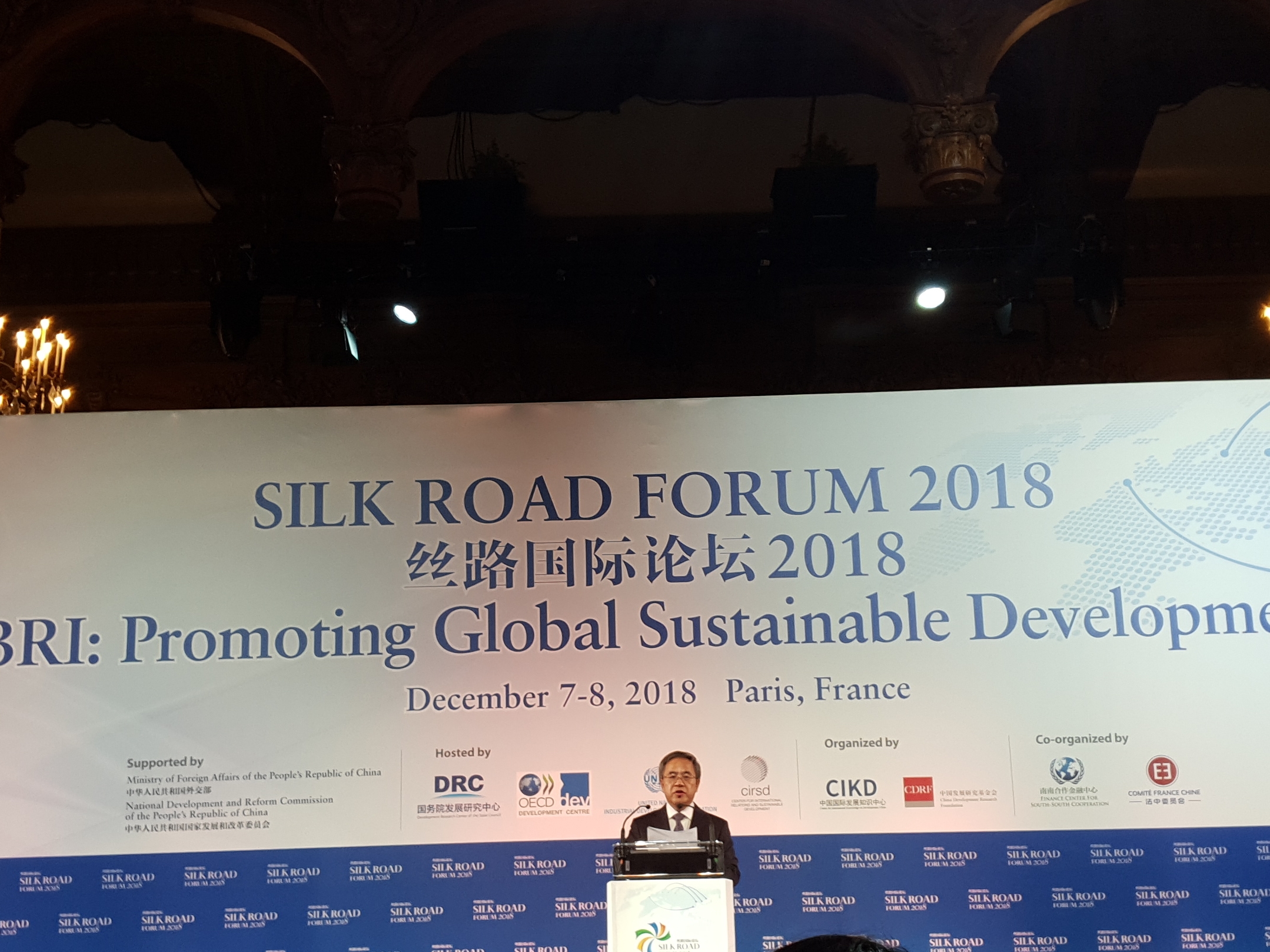 PARIS, 7 December 2018 - Vice Premier Hu welcomed new countries that joined to the Belt and Road Initiative stressing the initiative has been progressing steadily from a vision to a reality and generated fruitful results.

"As of now, 148 countries and international organizations around the world have signed cooperation documents of jointly building the Belt and Road with China. The Belt and Road Initiative and its core ideas have been incorporated into the documents of international organizations such as the United Nations and the G20. The successful completion of a batch of railways, roads, ports and municipal projects has brought local people tangible benefits," says Vice Premier Hu.

The French President’s Special Envoy and former prime minister Jean-Pierre Raffarin in his speech strongly supported international cooperation inside the Belt and Road Initiative framework that has brought opportunity of growth to Europe. Raffarin pointed out Europe should take the opportunities.

A message of President of the CIRSD Vuk Jeremic addressing was that European engagement with BRI could help the Old Continent “regain a more central place on the geoeconomic map of the world.” The alternative, Jeremic said, was for Europe to become “just an appendage” to a vast economic zone whose center would be on the other side of the world—what he called the “mare nostrum, of the 21st-century,” the Pacific Ocean.

DRC President Li Wei said the keynote speakers made enthusiastic addresses giving valuable recommendations for the future construction and development of the Belt and Road.

He pointed out today's world economy faced dire challenges, and hence has been particularly necessary and urgent built the Belt and Road jointly.

– It is imperative that all countries in the world jointly rise to the challenges, push forward structural reform and further promote globalization. Yet, there is a major power moving against the tide of economic globalization, prioritizing their own strategies, practicing trade bullying, withdrawing or threatening to withdraw from a string of multilateral cooperation mechanisms, thereby casting shadows on the global economic resurgence– said President Li.

He stressed certain country practiced trade protectionism repeatedly, which would inevitably incur varying degrees of damages to itself, other countries and the world at large.

Li said, “The initiative to jointly build the Belt and Road is open. Countries along the route or not, developed and developing ones, can all participate. Jointly building the Belt and Road is inclusive. It is compatible with the EU's recently released The EU Strategy on Connecting Europe and Asia and the ideas of regional cooperation set forth by other relevant countries, instead of being mutually exclusive. The achievements of the Belt and Road construction is shared. They will benefit all participants and different social strata of cooperating parties.” 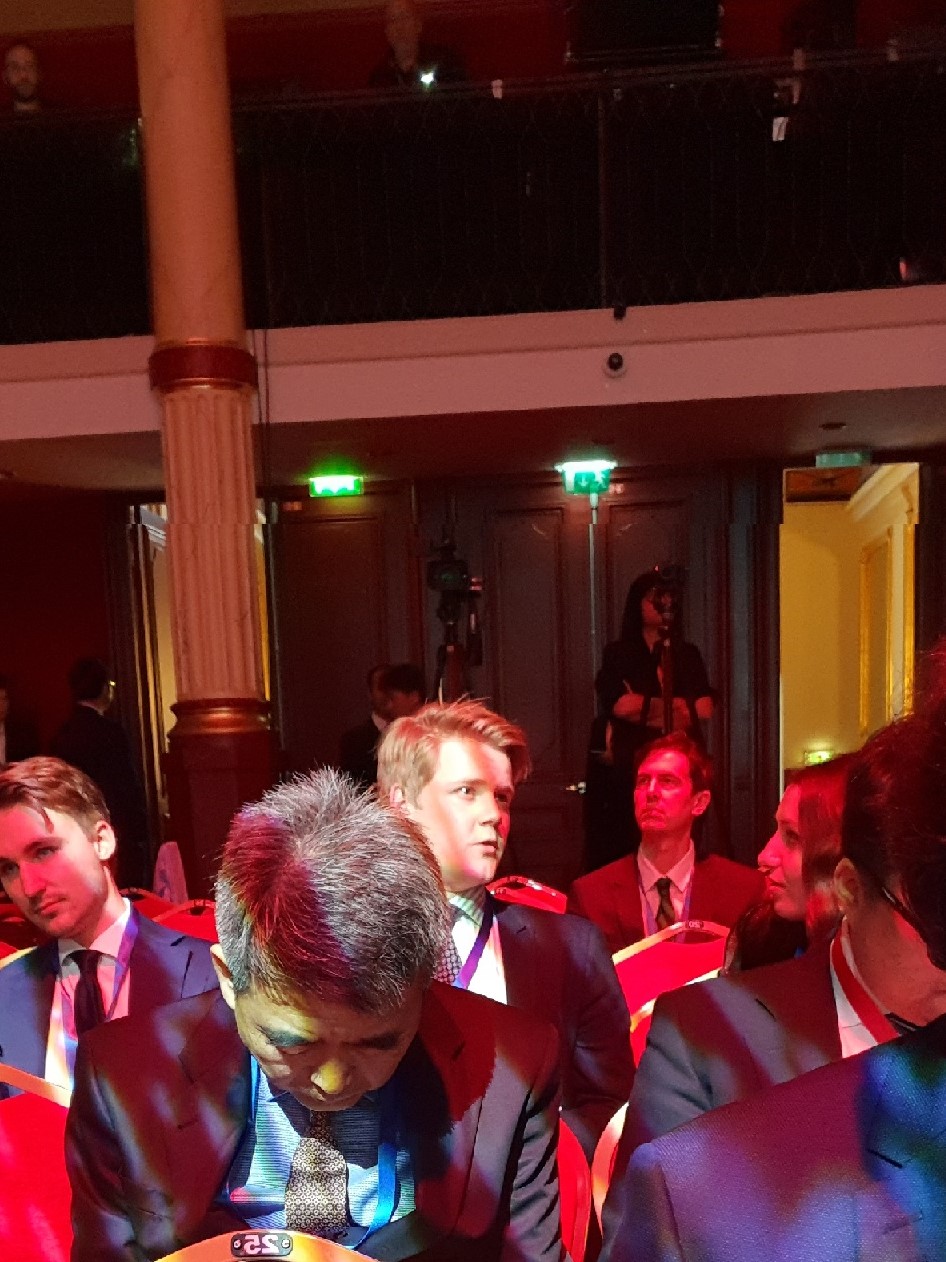 M.Sc. NATKO PLEVNIK AN INTERNATIONAL RELATIONS EXPERT AND MEMBER OF THE MARKETING ADVISORY TEAM OF GEOECONOMIC FORUM PARTICIPATED IN THE WORK OF THE PARIS SILK ROAD FORUM

During the plenary session  on the BRI  and Inclusive Development a director  of Hambantota’s port Ravindra A Jayawickreme  said how he has already  repeated a thousand times the Hambantota port was made a long ago before the Belt and Road Initiative. It was launched as a political project of former Sri Lanka PM and was not profitable. He stressed China’s investment helped the Port came out of the trouble and became efficient.

These fake analyses– traps for the BRI, that pretend as if they are scientific, easily spread globally. Even in South East Europe has been circulating a story on Hambantota’s as the „negative consequence” of the BRI’s cooperation.

The session showed that fake analyses- traps for the Belt and Road Initiative, aimed to weaken the BRI implementation dynamic, cause   confusion in its understanding and undo its results are serious treat to the BRI but could be overpowered with facts, measures, reforms and numbers.

During the plenary session on the BRI and Open World Economy Jeffery Sachs said the Belt and Road should reject coal as a source of energy and support only green projects. According to Sachs, the USA breaks all rules in the international economic order aiming to stop China’s development. Sachs assed it was not about economy but it has bene on geopolitics! 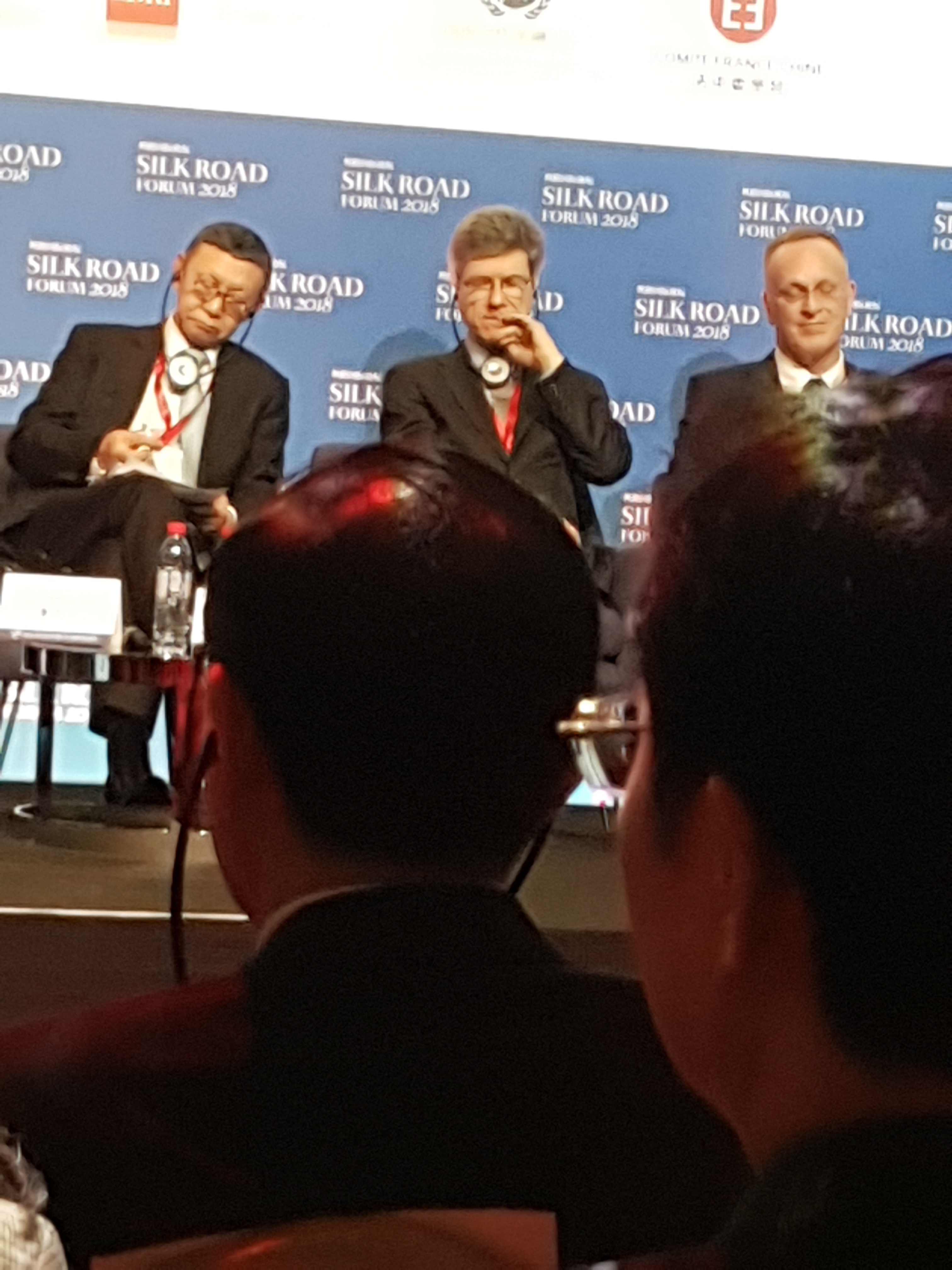 The Annual Meeting of the Silk Road Think-tank Network (SiLKS) was held 7 December in the morning, prior to the Silk Road Forum, in a hotel Intercontinental Paris, Avenue Marceau

SiLKS is the world’s leading think-tank network devoted to the study of BRI, with more than 55 members and partners.

President Li stressed a substantial progress on the development of the SiLKS was made in the meeting. The meeting approved Laos' National Economic Research Institute (NERI) and Peru's National Center for Strategic Planning (CEPLAN) to be new members of SiLKS. As of now, the SiLKS has 42 members and 13 partners.

The Three-Year Work Plan for the Silk Road Think Tank Network (2019-2021) was discussed and the Steering Committee adopted it. The Work Plan is recognised as a significant instrument in further building of SiLKS as a first-class and influential international think tank alliance that offers high-quality intellectual support for the Belt and Road initiative.

SiLKS globally recognised  as a first-class and influential international think tank alliance that offers high-quality intellectual support for the Belt and Road initiative.

The SiLKS has 42 members and 13 partners

Mr. Tao Pingsheng was elected in The Annual Meeting of the Silk Road Think-tank Network (SiLKS) as the new Secretary-General.

The Secretariat of the SiLKS has been compiling and publishing the bi-month “SiLKS Newsletter” since July 2018, in both English and Chinese, aiming further to promote information sharing among members and partners of the SiLKS.

The Secretariat of the Silk Road Think Tank Network is located at the Department of International cooperation of the Development Research Center of the State Council of the PRC under the leadership of the Secretary-General.

The Secretariat strengths collaboration among its members and boost the influence of the Silk Road Think Tank Network. SiLKS distinguished experts give to BRI intellectual support through  cooperative research, discussion and exchanges with members regarding the priorities of the “Belt and Road Initiative”. 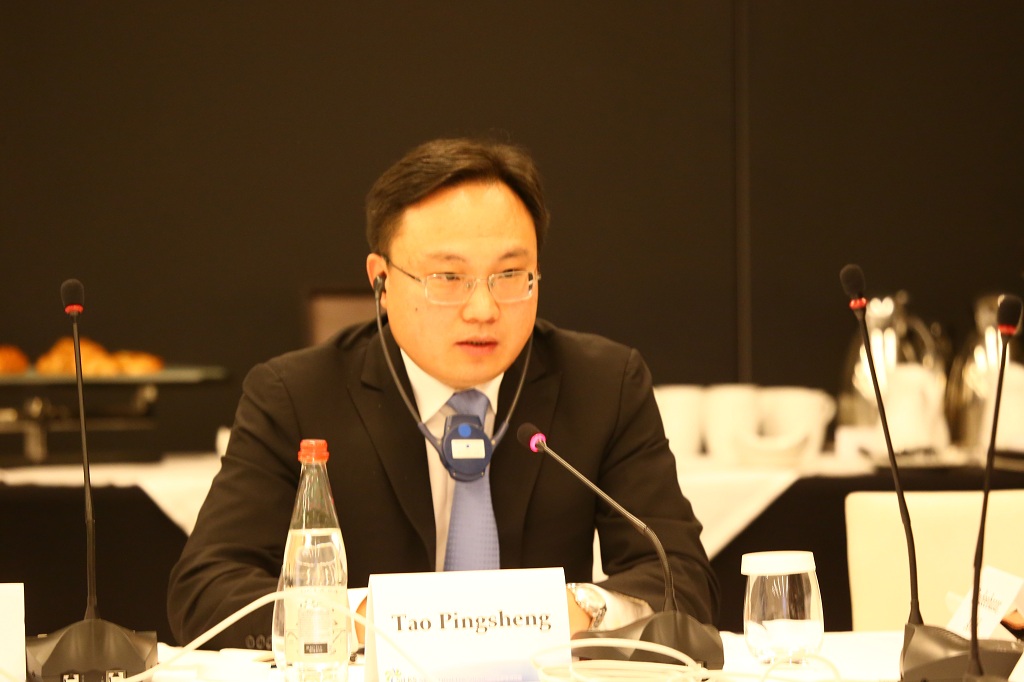 Vice President of the Geoeconomic Forum, Croatia Dr. Jasna Plevnik thanked to the SiLKS Secretariat for shaping a comprehensive and looking at the future three-year working plan.

She suggested to the SiLKS Secretariat to put strong focus on three things: articulating and promoting the notion  of right on development by Belt and Road; explaining  what essentially  differs the BRI’s projects from other models of cooperation and  preparing  SilKS  for protecting the BRI from negative tendencies in the international environment.

The right on development by BRI

Dr. Jasna Plevnik proposed that SiLKS launch a research that would promote that every country had right on development by and inside the BRI cooperation that she understood as a new phase of the economic globalisation.

She pointed out that the BRI had powerful resources to convergence other pro globalisation initiatives regionally and globally but strengthening of pressure on the global processes of economic interdependence   could in the near future create an environment openly hostile to the BRI.

Dr. Jasna Plevnik thinks the right on development by BRI could be faced with policies that only aim is to contain BRI cooperation by invoking “security” reasons.

What differs BRI from other models of cooperation

She stressed that for SiLKS has been very important to continue with explaining what differs BRI projects from other models of cooperation.There is a tendency in South East to connect any investment or construction work of Chinese firm with the BRI. This blurs BRI’s strategic concept of “connectivity” designed to make operative the idea of “shared development” through BRI’s concept of five connections.

And as a third Jasna Plevnik said it was extremely important for SiLKS to look at its activities from perspective that next years would be radically different for the  Belt and Road Imitative and consequently for the SiLKS engagement than last years.

–Now, I think the SiLKS should prepare itself for coming of a new phase in the BRI development and coming of  so-called initiatives that only aim will be to contain Belt and Road Initiative. SiLKS should work on PROTECTING the BRI focusing itself on forecasting what policies and spaces couldseriously endanger the Belt and Road aims, projects and its progress.I am not pessimistic about the future of BRI but think it is vitally important for SiLKS to think how to best PROTECT BRI of these new developments in global economic order focused on rejecting of economic globalisation and free trade – Jasna Plevnik said.