The Consensus Conference stressed China's achievements over   the past seven decades in maintaining sustained and rapid economic growth, promoting industrialization and urbanization, boosting scientific and technological innovation, reducing poverty on a large scale.

Over 400 representatives from think tanks and media outlets of some 100 countries and regions attended the event and adopted  the Shanghai Consensus on November 6.

China has followed its own model of development but in interaction with the rest of the world and that interaction could be a fundamentum for China's concept —building a community with a shared future for humanity.

China's development has influenced the world and offered a new vision based on multilateralism and anti-imperialism.

Former President of the Republic Croatia (2000- 2010) Stjepan Mesić was a keynote speaker at the Consensus Conference, said the CIIE has been a concrete and generous response from China to rising protectionism, and hoped Germany, as the first EU economy, could organize a similar fair.

President Xi Jinping met and took photos, just before he delivered a keynote speech at the opening ceremony of the second China International Import Expo in Shanghai on November 5, with former Croatian President Stjepan Mesic and other participants of the Hongqiao International Economic Forum. 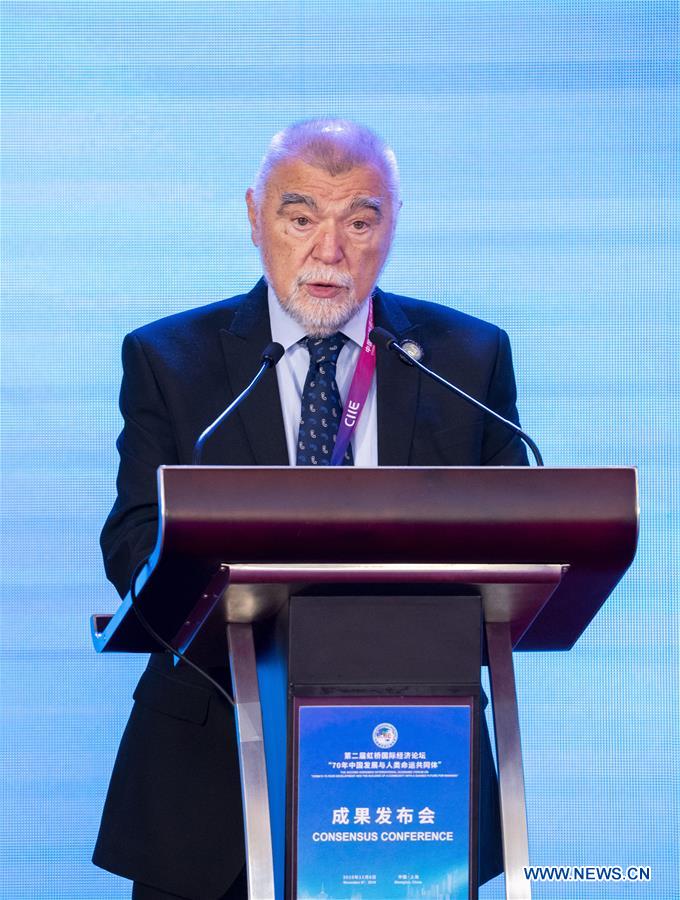 Please find down a full text of President Mesić's speech at the Consensus Conference.

- I am honoured to speak at globally distinguished the Hongqiao International Economic Forum. China has so many extraordinary economists and economic institutes whose economic models have proofed themselves in practice. China’s experts have had an indispensable impact on China’s economic growth that is well grounded despite current unprecedented challenges to it like America’s trade war on China. Since the 1990s to now the World Bank and other global financial institutions predicted China’s GDP would grow no more than 5 percent annually from 1994, to 2015. China’s potential for growth often has been underestimated though it has shown that it is here to stay.

I would like to congratulate China’s hard-working people, leaders and experts on remarkable 70th anniversary of the People’s Republic of China. They were and are central driving force behind China’s transformation to a middle-income country and together with the United States the leading power in technology and artificial intelligence.

I would also like to thank to express my gratefulness to amazing China Academy u of Social Sciences that brought me here in beautiful Shanghai.

This International Economic Forum is taking place under the framework of the Second China International Import Expo (CIIE) that appears to me as China’s very concrete and generous answer on tendency of protectionism in the world. Hope Germany would do something similar in Europe.

I understand the last 70 years of China, from Revolution in 1949 to 2019 as a path of reform (gaige) and China’s struggle to change and to remember. Recently, the renowned sinologist and historian Wang Gungwu said, at the launch of Think China magazine in Singapore, “China’s reforms don’t contradict the communist revolution – they consolidate it”.

There are many China’s economic achievements, unprecedented in human history, that must be admired but I am most impressed with China’s achievements in poverty reduction under the banner of socialism. In the history of humankind, the most successful country in poverty elimination is China. After China’s forty years of development 850 million Chinese were lifted out of poverty. According to the World Bank China has contributed more than 70% to global poverty reduction. China’s middle class has grown to 420 million.

Hope next year in Stockholm will be different and that fascinating results of China’s economists and leadership will be awarded by Nobel prise.

Now I will take this opportunity for providing my views on China’s project named the Community with a Shared Future for Mankind.

Currently, China seems to me as the only country in the world that pursues a global vision on constructing the better world for all people.

China’s passion and devotion to reform itself is supporting my deep belief that China has capacity to carry out world order closer to the community based on stronger multi-polarity, and new multilateralism based on shared development. These processes have already started by the Belt and Road Initiative envisioned by President of China Xi Jinping.

I share opinion with Professor Yan Xuetong, the Dean of the Institute of International Relations, Tsinghua University that for every country is essential what kind of leadership it has. China’s leaders with their ideas of development, experience, pragmatism and the ability to think strategically locally, nationally and globally have been essential for China’s historical success.

In past 40 years, I have witnessed China’s leaders ability not just to make any kind of development but also to move the country further from being the world factory to laboratory of the world and leader in 5 G economy.   Achieving of economic development is one of the main responsibilities of every government. The wellbeing of the people and peace are the fundamental goals of development.

I met with President of China H.E. Xi Jinping several times in China on the sidelines of high-level conferences and forums. I am not here to say who is a historical figure and who is not, but ideas, values and the work that President Xi Jinping has put beyond his foreign policy strategy called “Belt and Road Initiative”, I see historic for China and the world.

The “Belt and Road Initiative” is project that came to us from the future!

The BRI epitomises new kind relationship between China and the world and as such a major platform for building a community with a shared future in the new era.

President XI’s global community with shared future seems to me as a concept that has strength to change the very structure of the world order that has been based for centuries on the power politics.

This project for the world is absolutely new and will need a long way to eliminate the barriers brought to the world by geopolitics, eliminate the pain caused by poverty, colonialism, neoliberalism, unfairness, protectionism and populism and to create a path of development in accordance with sustainable development and people aspirations for a better life.

I have been visited China many times and saw with my own eyes China’s ability to create amazing economic and social progress for itself and the world.

That is why I am optimistic that China together with other countries will build a Community with a Shared Future for Mankind. -

Dr. Plevnik speech was focused on China and Historical Process of economic globalisation that was topic of Parallel Session of the Second Hongqiao International Economic Forum

Here you can find a full text of Dr. Jasna Plevnik's speech.

– The Geoeconomic forum Croatia was established in 2004 and at our first conference keynote speaker was Prime Minister Tun Mohamad Mahathir who talked on how financial aspects of globalisation were dangerous for Malaysia and its financial flows in 1997. However, after twenty-two years, the financial side of economic globalization resumes to make the world economic order less balanced. The global financial system has continued to be subjected to US regulations and the US financial system, and here the US finds levers for its unilateral politic and policies focused to on ruin the Iran nuclear deal, ignoring the WTO and controlling and limiting the global reach of Chinese companies.

Since 2001 to 2018 China has been initiator of many pro globalisation events, processes and projects. Since 2005, China has transformed itself from an importer of capital to the global investor through its direct investments and programmes of aid. China’s pro-globalisation approach could be recognised in the Belt and Road Initiative and Chinese President Xi Jinping, vision the world the Community with a Shared Future for Mankind China initiated and established several new regional and global financial institution which aim is not to be copies or replicas of old global and regional financial institutions but to improve the system for development financing.

China’s role in the G-20 has become significant and it has been focused on resolving the negative aspects of global finance, investment and trade, industrial growth through innovation, and the implementation of the UN 2030 Agenda for Sustainable Development. G-20 is unlike traditional groping of states, the real child of financial globalisation capable to hold a central position in addressing the current challenges of economic globalisation from America’s war on China to IMF’s prediction of a looming new economic global crisis.

There are significant differences between the current economic globalisation and that in the 1990s or before the global financial crisis.

America’s President Bill Clinton (1993 –2001) encouraged and praised the globalization of China.  America was opening up to China and to different forms of mutual interconnectivity President Obama’ s Administration asked of China to work together on the developing of a multilateral system of “global governance.” It had many real experts on China. Zbigniew Brzezinski proposed developing of a new informal G- 2 in which America and China could address global challenges of bilateral interest. It was an idea of shared global leadership.

The current American administration is openly centred on the short-term; unilateral economic interests are crippling the economic world order and international organisations credibility. What we need to know about President Trump is that he is a politician dedicated primarily to internal affairs.

In the current Administration are some experts for China that in the broader America’s academic community are not accepted as China experts.

However, American global financial and industrial companies continue to support economic globalisation as a central driving force behind their economic growth.

Beijing while negotiating with Washington continues to define common goals with the USA. Progressing of economic globalisation is hardly thinkable without Beijing and Washington in next decade.

Economic globalisation is a form of economic relations among countries focused on interdependency and should not be equalised with the world order that refers to power structure that is defined by strategic relations among big global and regional powers.

The future of economic globalization 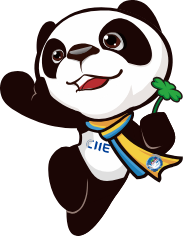 China has capacity to lead the process of economic globalisation in the next decade, but it seems reasonable to ask does it reflects China’s global diplomacy goal and how does it fit to China’s vison for the world order that is based on multipolarity.

The strategic interest of China is to continue the process economic globalisation and influence on other great powers to support new stages of globalization of the world.

In the official documents of the Communist Party of China, the military, and in academic literature, globalization is described not as a Chinese of American project but as a historical and irreversible process of shaping a world in which China is one of the central pieces.

China’s strong economic interdependence with the world will continue to develop synergy with its vison of the international order that is based on multilateralism and multipolarity or polycentricity in which one power will not dominate on others.-

Volunteers:Thank you for your dedication and help.