China and the Balkans: Past, Present, and Future

Jasna Plevnik - Cooperation between the Balkans and China has great potential within the Digital Silk Road!

"The Balkans is a broad term, and I will now use it in a narrow sense with a focus on our part of the Balkans, you all know which 6 countries it is, and which make up our region within the Balkans.

There is no such thing as a completely new relationship between states. The current relations, like the former relations between China and Yugoslavia, respect the principles of non-interference in the internal affairs of other countries, justice, and mutual benefit, which in cooperation "17 plus 1" and the initiative One Belt is once called a win-win. Of course, there are many new things are in these relations: especially in the field of financial connectivity, transport and tourism infrastructure", sad Dr. Jasna Plevnik.

She stressed that the Balkans had no geopolitical history with China, nor has shaped current relations geopolitically. China has presented itself as a politically neutral force in the region since 2012 and 2013, respectively, and does not follow the policy of spheres of interest. Relations between China and the country of Southeast Europe are developing in an economic, not a geostrategic direction.

„On the other hand, China is a global power and of course its current presence in the Balkans is analysed by the EU. China does not question the region's inclusion in the EU, nor does it aim to change the balance of power in Europe.

If you look at the history of the development of "17 plus 1" you will see that this form of cooperation since 2015 is working hard to bring its mechanisms and projects in line with EU standards. China strongly respects the relationship between Southeast Europe and Brussels.

Dr. Jasna Plevnik thinks that the cooperation between the Balkans and China has great potential in the area of ​​the Digital Silk Road and that this cooperation can help the Balkans to avoid the digital lag.

"China is a leading force in the development of the digital economy, and in my opinion, it is a cooperation that should mark the future relations between China and the Balkans.

However, I am worried because of artificial obstacles to this cooperation, which do not come from relations between the Balkans and China but the sphere of economic and technological competition between the EU and the USA and China.

We could see first-hand the attempts to geopolitize the digital cooperation of Southeast Europe and China through American diplomacy known as the "5G security pact" behind which is the disruption of the free market and competition based on the idea of ​​winning the best. I hope that these problems could disappear with the new Biden administration. "

According to Jasna Plevnik, the Balkans' relations with China should develop into the direction of deeper connecting the Balkans with Eurasia and the growth of Chinese direct investments in the region and rise of exports of Southeast Europe to China.

She said the cooperation within the One Belt, One Road initiative, which is actually another name for continuing economic globalization, has the potential to globalise the Balkans and connect that part of Europe with  China and Eurasia.

Jasna Plevnik stressed that President Xi Jinping said at the „ 17 plus 1" summit held in Beijing that he planned to make Central and Eastern Europe the "first region" in the world to be fully covered by the Land and Sea Belt and Road Scheme.

It will be a long way and for now, it seems fairer than globalization according to the rules of the so-called Washington Consensus. These results were bad for Balkan economies and good for Western Europe.

Jasna Plevnik pointed out that through cooperation within the framework of "17 plus 1" and "One Belt, One Road", which China perceives as a public good, Balkan countries have a possibility to stronger participate in building more powerful and modernised multilateralism in international relations.

Jasna Plevnik said, "It seems to me that Serbia is pursuing a modern policy in its attitude towards the vaccines and its attitude towards the great powers. Serbia can come together with China on some issues, on others with the US, third with Russia, and fourth with the EU. I see this as an essential content of the new multilateralism that should be encouraged by "Belt and Road" and "17 plus 1."

It is also a great opportunity for the Balkans to support China's visions of the international order as a community in which humanity has a common future. In this way, the Balkans could participate in the modernization of international relations in the direction of human interests and deviation from the policy of power that has been disturbed peace among people for centuries. 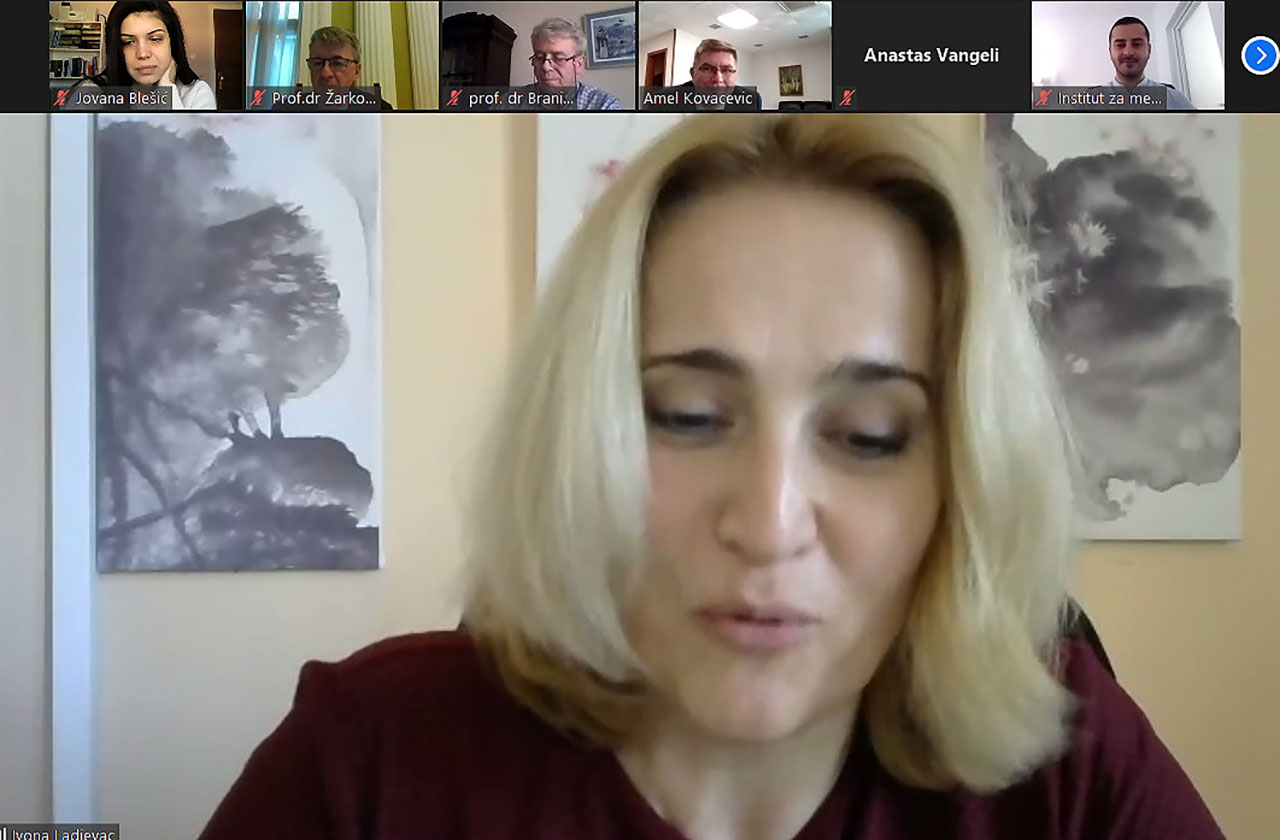 The meeting was moderated by the head of the Centre for “Belt and Road” of the Institute of International Politics and Economics Dr. Ivona Lađevac.