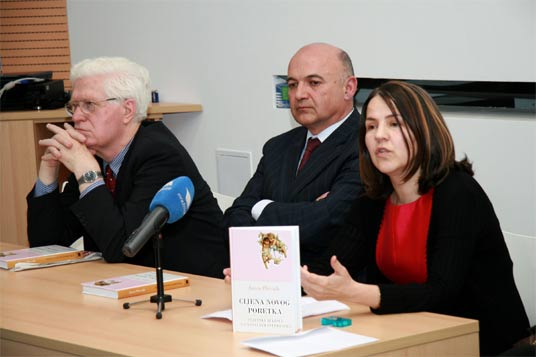 The Price of the New World Order, The World Challenges to the National Interests

Jasna Plevnik's new book about the real world challenges to Croatia's national interests was publicly presented in Karlovac on April 23 2009, at City town Library. Former Croatian minister of economy Ljubo Jureia, and president of The Geoeconomic forum, academician and former minister Zvonimir Baletić, and The Golden Marketing's editor of the book Mirjana Paić-Jurinić presented it.

The aim of the book, as Jasna Plevnik said, has been to help a clearer understanding of the mistakes that Croatia did integrating itself into the world, the European Union and the Balkans. She stressed Croatia's establishment have forgotten that in the processes of integration has been no such thing, as "global interest" only has existed national interests of other states.

Having no concept of economic patriotism Croatia's political elite, she said, missed to protect the national interests, and Croatia has become a state that only can say yes in the processes of integration.

" At last we are witnessing that PM Sanader's diplomacy put in the first place the national interest in resolving border dispute between Croatia and Slovenia what could be sign that Croatia can say no, Plevnik said. Former Croatian minister of economy Ljubo Jurčić, and President of The Geoeconomic forum, academician and also former minister Zvonimir Baletić, and editor of the book Mirjana Paić-Jurinić presented the book. Baletić thinks that Croatia still has a time to ask itself how to improve its current dependent position of big foreign corporations.

Jurčić described today's global economic crisis as a beginning of the end of industrial civilization system, and a human tragedy caused by the greediness of the financial capitalism saying that should not happened.The book is extension of Jasna Plevnik's previous book Beyond the Globalisation(2003) that has been used as a textbook at universities of Priątine, Sarajevo, Zagreb and Ljubljana.