RESEARCH OF CROATIA'S PUBLIC OPINION - China gets a positive verdict

China has asserted itself on the world stage as the second economic world power and the first trade nations of the world. In 2011 China launched a foreign policy initiative on deepening relations with the 16 countries of Central and Eastern Europe in the field of investment, trade, cultural exchange, tourism and education. Croatia also participates in this historically new form of relations with China under the formula "China plus 16 ".

In a survey by the Geoeconomic Forum prevails a favourable view of China while the Croatian Government's policy toward China is evaluated negatively.

These are the findings of the survey conducted by the Geoeconomic Forum from January 10 to March 6, 2014 among 519 respondents in Croatia. The survey was conducted via Internet. 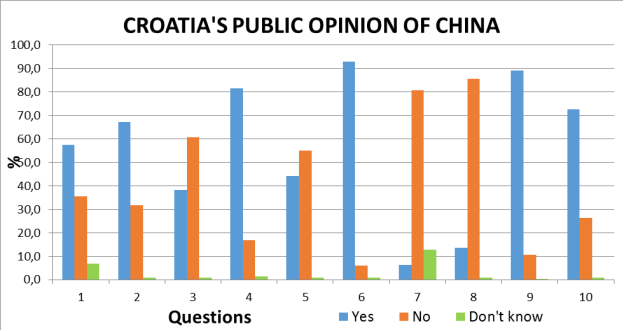 1. Do you see China as a peaceful world power?

2. Will China become the first economic power in the world?

3. Has China developed its political system as it has done with its system of economy?

4. Do the EU and the U.S. apply double standards when criticizing China for a control of the Internet?

6. Should Croatia to develop a broader economic cooperation with China?

7. Does the Government of PM Zoran Milanović lead an effective policy toward China?

8. Do you see differences in the political systems of China and Croatia as an obstacle for better economic cooperation?

9. How would you describe Chinese investments in Croatia: acceptable or not acceptable?

When you share this research with others, copy it, cut or paste it, please, specify Geoeconomic Forum as a source of the research.  Thank you